Skip to main contentSkip to menu

Effective March 1, 2021, LHV will no longer support the use of Internet Explorer on our website. Newer browsers protect you better against viruses, scams and other threats. You can still use our website using Internet Explorer, however some features and banking operations might no longer work as expected. Please download one of these up-to-date, free browsers: Chrome, Firefox, Edge.

The Fund prefers foreign markets, more liquid and traded instruments on regulated markets when investing assets. The assets of the Fund may be invested in their entirety in equities, equity funds and other equity-like instruments. The Fund is allowed to borrow up to 10% of the Fund's assets value. The long-term preferred asset class of the fund is public equity investments.

Performance
From beginning
...
Current year
...
Current month
...
Net asset value
...
The Fund's return is expressed as the net yield after deduction of all fees.

Information about the fund

Success fee: 20% per annum on any increase in the fund's rate of return over the annual increase of Estonian social security pension contribution since the end date of previous calendar year.

The ongoing charges figure is an estimate based on the current management fee and the 2020 level of all other recognized costs. Ongoing charges may vary from year to year.

October 2021: BaltCap Fund is participating in a large-scale investment

October led to significant growth in most of the world’s stock markets. Measured in euros, the MSCI World index rose 5.8% during the month, the US index S&P 500 rose 7.2%, the European Stoxx 50 rose 5.1% and the MSCI Emerging Markets index rose 1.2%.

Most of the companies in the fund’s portfolio reported good quarterly results during the month, as recovery from the pandemic supported profits. Profits grew the most in the energy and materials sectors, which are currently one of the key positions in our funds. Nordic listed companies, which are more dependent on the economic cycle, are also doing well and reported record quarterly profits. Investments related to precious metals, supported by growing inflationary pressure on the global economy, also contributed to the increase in the fund unit’s price.

The local private equity company BaltCap has announced that its BaltCap Infrastructure Fund is participating in a new large-scale investment to build an 85,000 square metre multifunctional sports complex in Vilnius. The project is being implemented in cooperation with the Lithuanian Ministry of Education, Science and Sport, and Vilnius City Council. This is the largest ever public-private partnership project in the Baltics.

The euro appreciated against the US dollar in September, although world stock markets mostly fell. Many indices declined: MSCI World decreased by 2.4% in euros, the S&P 500 index that tracks the US stock market went down by 2.8%, European Stoxx 50 declined by 3.4% and the MSCI Emerging Markets index by 2.3% in euros.

Emerging markets moved at a similar pace: The MSCI Emerging Markets Index showed a 2.9% increase in euros during the month. The local Baltic stock markets rose significantly in August, led by the Tallinn stock market with 12.9% growth. The Riga and Vilnius stock markets rose relatively equally by 4.1% and 4%, respectively.

Against the background of good financial results, equity positions in the fund continued to appreciate, while the decline in the share prices of gold mining companies had a negative impact. Among the most significant changes, we sold some of the individual equity positions to reduce the level of equity risk following the sharp rise after the coronavirus crisis. Among larger sales, we profited from shares in Siemens Healthineers, Metsä Board, Stora Enso, Getinge and Coor Service Management Holding. We also reduced our equity positions on the Baltic stock markets.

In August, LHV pension funds acquired a production building in the Lasnamäe district in Tallinn to earn long-term rental income. The production building at 3/5 Taevakivi St. was built in several stages between 2006 and 2012 and has a leasable area of approximately 10,000 m2. The entire building is leased to Plastone OÜ, a company with a Nordic background, which produces plastic accessories for medical, electrical and electronics companies.

In addition to the production building in Lasnamäe, LHV pension funds own the Valge Maja office building in the centre of Tallinn, the Microsoft office building on the TalTech campus, three stock office-type commercial buildings in Jüri and 127 rental apartments called Lumi Kodud in the North Tallinn district. At the end of 2021, another 164 rental apartments will be completed for the pension funds on Mustamäe Road in Tallinn.

In August, a directly acquired stake in Bank North, which is starting operations in the United Kingdom, was added to the fund’s portfolio. The Bank will focus on lending to small- and medium-sized enterprises operating outside London. The founders have long-term banking experience, and the Bank’s investors include local entrepreneurs and companies.

One of our most significant investments ended in August when Transpordi Varahaldus redeemed its bonds before maturity. These offered the fund an attractive return compared to the bond markets. In the future, given the new legal requirements, we will focus on investments with higher expected returns. 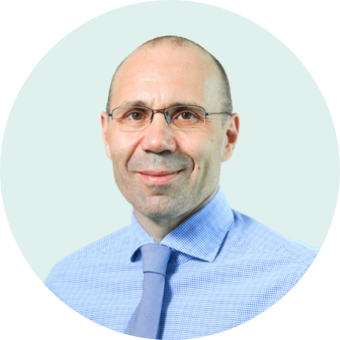 What if inflation is not temporary?
Andres Viisemann, Head of LHV Pension Funds

October was a good month for stock markets, up 5.8% on the MSCI World Index. The S&P 500 index, which represents the shares of the largest US companies, rose by as much as 7.2%, reaching a new record level by the end of the month. The Stoxx 50 index, which tracks the shares of large European companies, rose by 5.1%. The value of emerging market companies also increased, but to a lesser extent: 1.2%.

On the other hand, bond markets have been on a downward trend since the summer of 2020, as the governments of large countries have made major changes to their fiscal policies to combat the virus. The United States are increasingly embracing the principles of modern monetary policy, which means that maintaining a balanced national budget has become secondary, and politicians are spending and investing as much as they like.

Although economic growth has accelerated significantly since the pandemic crisis and employers are finding it increasingly difficult to find workers, central banks continue to buy bonds, which is essentially equivalent to financing government spending. This involves a danger that financial discipline will be difficult to re-establish if politicians get used to distributing money loosely.

From month to month, the growth of the consumer price index has accelerated. In October, for example, annualised inflation in the United States rose to 6.2%, the most significant jump in 30 years. At the same time, the (nominal) interest rate on 10-year government bonds was only 1.58%, suggesting that the US dollar had a real interest rate of –4.62%.

In October, annualised inflation in the eurozone reached 4.1%, exceeding the European Central Bank’s price growth target by more than 2 percentage points. Nevertheless, the European Central Bank is continuing its bond-buying programme at an unchanged pace. Both US and European central bankers seem to believe that the price increase is temporary and only reflects the fall in prices during the coronavirus crisis. This appears to align with the view that the economic environment is not strong enough to withstand interest rates above 0%.

Milton Friedman argued in 1956 that “inflation is always and everywhere a monetary phenomenon in the sense that it is and can be produced only by a more rapid increase in the quantity of money than in output”.

However, the experience of recent decades has shown that increase in the quantity of money alone will not accelerate price growth if consumers do not believe in it. However, this may mean that if the rise in consumer prices finally gains momentum, even central banks with their monetary policy levers will not be able to control it easily.

In addition, I am beginning to feel that the days when central bankers were superstars are a thing of the past. If Alan Greenspan or Mario Draghi were able to influence investors’ future expectations with a few words, now the utterances of a star tech entrepreneur may have more weight than the statements or persuasions of Jerome Powell or Christine Lagarde.

Although I would like to believe that economics is based, even just a little, on reality (actual profits and cash flows) and not just on dreams and expectations, it is dangerous to underestimate the impact of virally spread narratives. If the increase in consumer prices does not slow down over the next twelve months, central banks will be faced with a dilemma. They either take decisive action to control inflation or support the economy and risk even faster price increases in the future, which will start to eat away at the economy.

Investing in an inflationary environment

It is widely believed that stocks offer good protection against inflation. However, history has shown that stock yields are higher when inflation is slow, and when price and wage growth accelerates, stock yields fall.

Real estate, raw materials and precious metals have historically provided better protection against inflation than stocks. Therefore, in the case of LHV’s higher-risk pension fund investments, there has been an increased focus on these three asset classes.

The average annual yields of the five asset classes in the US, taking into account the inflationary environment from 1871 to 2021. Source: Citi Research.

In the case of real estate, however, the fact that most investors finance their investments in this asset class with bank loans and bonds is something to keep in mind. In this case, there is a huge difference between whether the debt is taken out with a variable or a fixed interest rate. Should consumer prices continue to rise at the current rate, which is twice the target set by the European Central Bank, it is naive to assume that interest rates will remain at current levels as well.

We are living in an increasingly financialised world, which means that almost every investment and transaction is made with the help of a loan or leverage. While loan-free real estate is a relatively low-risk investment, real estate acquired with a low-own contribution is anything but risk-free. In this case, more may be lost than was put into the equity transaction. 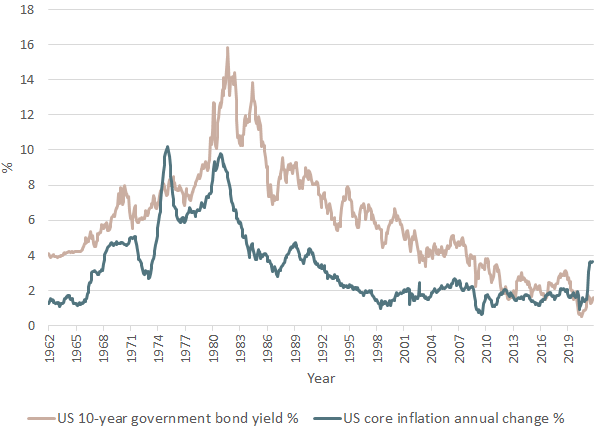 The above chart compares the annual yield on 10-year US government bonds with the country’s annual inflation rate. US real interest rates have only been negative for a very short time in the past.

As I see the economic environment being simply too fragile for it, I have not yet personally believed that the future will necessarily be inflationary. However, this chart made me think that it is not impossible for inflation expectations to start behaving independently. In this case, curbing them will require a truly radical monetary policy and strongly impact all asset classes.

October was a good month for stock markets, up 5.8% on the MSCI World Index. The S&P 500 index, which represents the shares of the largest US companies, rose by as much as 7.2%, reaching a new record level by the end of the month. The Stoxx 50 index, which tracks the shares of large European companies, rose by 5.1%. The value of emerging market companies also increased, but to a lesser extent: 1.2%.